The Post-Baccalaureate Certificate in ceramics is an invitation to focus on your art, working in the studio to build your artistic practice, and engaging with faculty and visiting artists to develop your creative potential. Whether you are an independent artist, a production potter, or plan to apply to M.F.A. programs, this certificate is designed to be an accessible steppingstone to the future. You will be given the time, resources, and the studio space to meet your creative goals.

Work one-on-one with visiting artists through individual and group critiques, artist-led workshops, and presentations. Build professional connections and experience a wide variety of viewpoints on a singular medium. 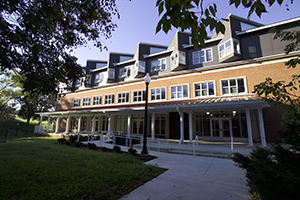 Manning works within the continuum that is functional ceramics and its historical precedents. Formal decisions and discoveries within his work, as well as aesthetical choices, have developed over many years of dedicated studio practice. The work has evolved in many parallel paths—some more dominate than others at times; routed in process/material, food/culture, function/utility, and always with the aim of thoughtful design. His work has been exhibited both nationally and internationally via traveling exhibitions, juried shows, and invitationals.

Inside the classroom, Manning exploits the vast history and breadth of ceramic art to show students the immense potential clay has had for the past and has for the future visual and physical communication.

Knudsen was born and raised in the Appalachian Mountains of West Virginia. She attended West Virginia University for studio art with a focus in ceramics. After receiving a Bachelor of Fine Arts degree from WVU, Knudsen moved to Floyd, Virginia, where she did a three-year apprenticeship with renowned ceramic artists Donna Polseno and Richard Hensley.

Knudsen now lives in Copper Hill where she shares a ceramic studio with her husband Josh Manning. Her current work is wheel thrown porcelain pottery that is fired in a gas reduction kiln. Her influences are both traditional and contemporary, with a strong inspiration from Asian pottery in her forms as well as her glazes.

Josh Manning, director, is happy to answer your questions.